Dr. Tucker is professor and chair of obstetrics and gynecology at the University of Mississippi Medical Center (UMMC). He was sworn in as president during ACOG’s 2021 Annual Clinical and Scientific Meeting, held virtually because of the ongoing COVID-19 pandemic. 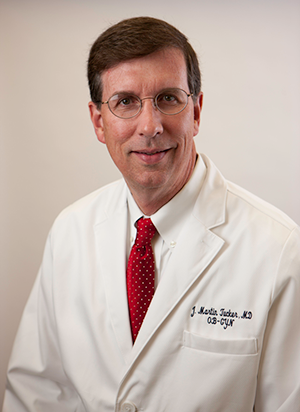 In his speech to the College, Dr. Tucker reflected on the pandemic, which has involved 30 million cases in the United States and close to 600,000 deaths. Throughout the public health emergency, he said, ACOG’s 60,000 members have practiced on the front lines, and the organization has had key roles in developing best practices around the effects of COVID-19 on patients, especially pregnant patients. “The events of the past year quickly brought challenges and changes that none of us could have anticipated,” Dr. Tucker acknowledged. “But we adapted. I have to think in large part we adapted because we care. We care about our patients, we care about medicine, we care about women’s health care, we care about the future, and we care about each other.”

During his presidency, said Dr. Tucker, “ACOG will continue to emphasize its mission of education, practice support, research, and advocacy.” He highlighted ACOG’s strides in promoting diversity, equity, and inclusion, adding, “We have so much more to accomplish.” His planned presidential initiatives are pragmatic in the context of an unpredictable transition from the pandemic to a new normal. His priorities include four goals central to ACOG’s mission: achieving equitable reimbursement for women’s health care services; expanding immunization for women, prioritizing the COVID-19, influenza, Tdap, and HPV vaccinations; leveraging ACOG’s partnership with the Indian Health Service to improve Native American women’s access to subspecialty care (narrower fields within obstetrics and gynecology, such as maternal–fetal medicine); and evaluating ACOG’s strategic planning and active policies.

Dr. Tucker has been active in ACOG at the national, District, Section, and committee levels, including as secretary of the College and chair of the Council of District Chairs. Within District VII, he was chair, vice chair, and secretary—and previously, in the Mississippi Section, he was chair, vice chair, and secretary–treasurer. He was a McCain Fellow and a member of the American Medical Association CPT Editorial Panel. Among his leadership roles in other medical societies and chapters, he chaired the Mississippi Infant Mortality Task Force and the Council on Legislation for the Mississippi State Medical Association.

The American College of Obstetricians and Gynecologists (ACOG) is the nation’s leading group of physicians providing health care for women. As a private, voluntary, nonprofit membership organization of more than 60,000 members, ACOG strongly advocates for quality health care for women, maintains the highest standards of clinical practice and continuing education of its members, promotes patient education, and increases awareness among its members and the public of the changing issues facing women’s health care. www.acog.org