More than 16 million women of reproductive age are covered by the Medicaid program. Medicaid is the largest single payer of maternity care in the U.S., covering more than 40% of U.S. births and playing a critical role in ensuring healthy moms and babies.

Medicaid accounts for 75% of public family planning dollars, every $1 of which saves Medicaid $7.09. The Affordable Care Act’s Medicaid expansion reduced the uninsured rate among women ages 18-64 by nearly half, from 19.3% to 10.8% in 5 years.

ACOG opposes state and federal reforms aimed at reducing participation in the Medicaid program and establishing barriers to care.

Our nation’s rate of maternal mortality is rising, and a growing body of evidence shows that many of these deaths, particularly from preventable causes such as overdose and suicide, occur after pregnancy-related Medicaid coverage ends.

There is growing consensus, including by state maternal mortality review committees, that extending Medicaid coverage would ensure that medical and behavioral health conditions can be managed and treated before becoming progressively severe.

ACOG advocates at the state and federal level to enable all women whose pregnancies are covered by Medicaid to keep their Medicaid coverage for one year postpartum, including the full range of appropriate services such as case management and outreach, substance use disorder treatment services, and mental health screening. 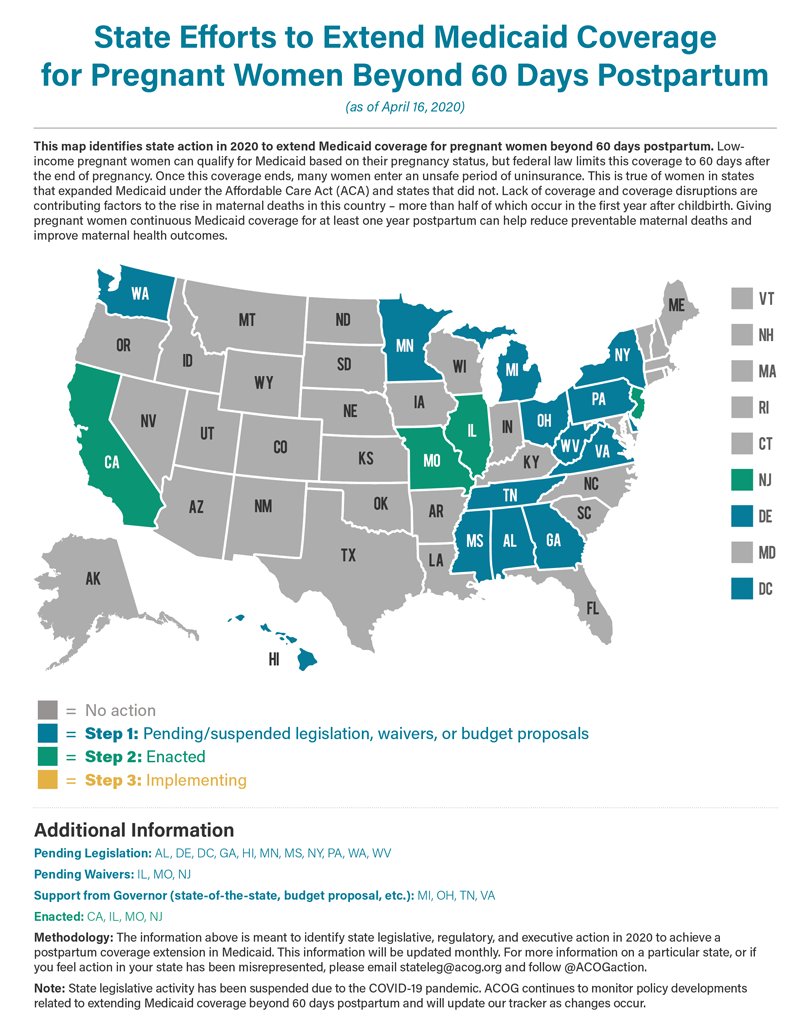 Recently, states have sought waiver authority to restrict or limit access, condition the receipt of care on meeting standards outside of the objectives of the Medicaid program, and/or alter the underlying financing of care itself, shifting financial risk to enrollees.

ACOG supports the use of waivers to expand access to meaningful coverage for low-income women and opposes efforts to use waivers to restrict access to coverage or shift costs to enrollees.

Medicaid’s federal “any willing provider” and “freedom of choice” protections were enshrined in law to ensure that there are enough providers to care for Medicaid beneficiaries. Legislative or regulatory attempts to deny or restrict provider participation in the Medicaid program would jeopardize access to primary and preventive care for millions of Americans.